“The plaster was chipped, the paint was bubbled, the yard a jumble of juniper, tree limbs were growing through the walls, the floor sagged and rodents and snakes ran freely through the house,” the committee chair reported.
The Stone House Committee began holding its own independent monthly meetings in January 1990. The Ladies Luncheon Club agreed that the Stone House group’s fund-raising efforts should be kept separate. A special meeting was called April 3, 1990, to formalize the new entity under its own name as a tax-exempt entity — the Stone House Historical Society, comprised on that first day of fifty-two members.

Old-fashioned ice cream socials underwrote materials for a new roof. Local clubs made financial donations; local carpenters, contractors, roofers, and others donated labor and some of the needed materials. Donations of period furniture were making the house comfortable and attractive, books were collected for the library, which was discontinued in 1994.  The ice cream social gave way to yard sales, crafts sales, flea markets, bake sales, theme parties, a host of raffles and our still-popular Old-Fashioned Christmas open house.

The mortar was restored and the stone walls resealed. Exterminators dislodged bats and termites. Douglas fir was purchased to duplicate the original floor. For many years the Society paid a professional gardener to help its volunteers maintain the landscaping around the Stone House and the offices.  HVLA’s maintenance staff now does much of the work.

Stone House was built before closets were common; a storage shed became essential for infrequently used items and those in need of refinishing, upholstering or refurbishing before being displayed. Members volunteered and local craftsmen donated countless hours and effort. 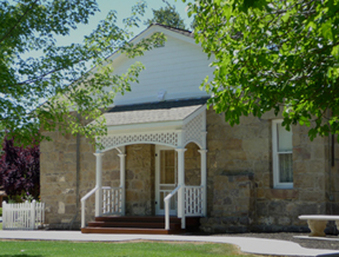 It was recognized in 2012 that the back porch needed to be replaced. It had been hastily built in 1968 and in recent years had become the primary entrance into Stone House. More than 1,000 volunteer hours, with HVLA’s financial help, have added a stunning new porch with copycat fretwork to reflect the character and design of the front porch built in 1894.